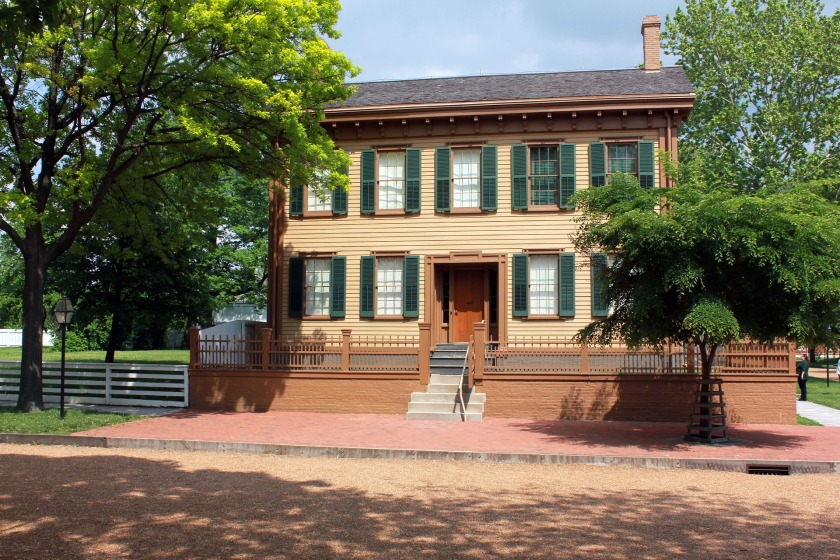 Presidents Day is a good time to reflect on the office of the presidency and our expectations for the people who have been elected to lead our nation. There is much to consider on this day, coming as it does less than 48 hours after a strong bipartisan majority in the Senate voted to convict Donald Trump during his second impeachment trial but fell ten votes short of the required two-thirds threshold.

Taking the long view, more than 1,000 historians and constitutional scholars had urged conviction so that “No future president should be tempted by the example of his defiance going unpunished.” In considering the flawed individuals who will always hold this position, presidential historian Lindsay Chervinsky writes this weekend on the “incredible power we entrust to imperfect hands.”

From a preservation viewpoint, I have thought about the places that shaped our presidents. Places that, as presidential historian Michael Beschloss has said, give us the opportunity to “walk through autobiography.” * What do they suggest about the characteristics needed to faithfully execute the Office of President, and to preserve, protect and defend the Constitution of the United States?

My visits to presidential homes began as a young child on family vacations. It was one of those trips — a car ride through the heartland, working our way north from Tennessee to Chicago — that made the longest-lasting impression.

I saw things on that trip I’d never seen before. Lush, impenetrable fields of corn planted right up to the roadside of those pre-interstate highways convinced me that we were caught in a maze where I had to count on my parents’ map-reading skills to escape. Two places from that trip shaped me forever: Wrigley Field, where I saw my first major league baseball game and became a fan for life; and the Lincoln Home in Springfield, a historic site that intrigued my young nine-year-old mind in ways I didn’t fully understand for years.

Abraham Lincoln’s home — the only one he ever owned — was a place of autobiography. What I remember most about that house was how very ordinary it was.

Oh, it was well decorated for the period, exuding a prosperous, middle-class aura. The National Park Service operation spoke to its importance in shaping the president who would save the nation. But I had seen much grander homes when visiting my grandparents in Franklin and Nashville. Two-story Greek Revival-style townhomes were a dime a dozen in communities throughout the mid-South in the 1960s.

We were there during the centennial celebration of the Civil War and the place was packed. More than fifty years later it remains a site that attracts visitors who very much go out of their way to see how such an extraordinary individual arose from such ordinary surroundings. Springfield is where we see Lincoln as a man of the West, who came up through self-education and hard work to rise to the pinnacle of power at a time of extraordinary crisis. And it was something from this place — for Lincoln was definitely of Springfield — that gave him the strength and character to lead a nation.

It took another president from Illinois to drive home the point about the connections between ordinary places and extraordinary people.

President Barack Obama was speaking in Chicago at the dedication of Pullman as a National Monument. After some background on the site’s role in helping build an African American middle class, President Obama spoke to the large number of students in attendance about why this place in the heart of their community was being designated a national monument:

Speaking directly to the school children, the president continued.

Not all our great presidents came from humble surroundings, but all were shaped by place. Of the three who consistently rank at the top of historians’ lists of greatest U.S. presidents, Franklin Roosevelt quickly comes to mind as a scion of wealth who was profoundly shaped during his time of treatment for polio at Warm Springs, Georgia.

George Washington’s family had land and held slaves, but were not necessarily wealthy by 18th century standards. Yet as historian Andrea Wulf has shown, at Mount Vernon Washington connected to that land and developed a garden that spoke to the vibrancy of the American landscape and experiment in self-government.

Lincoln, in sharp contrast to those two, was born into poverty and was raised in very ordinary circumstances, but he was shaped by communities in Kentucky, Indiana, and then in Illinois, first in New Salem and ultimately in Springfield.

Washington’s place in the firmament of American presidents will always be secure. A singular figure in the American revolution, he was the “indispensable man” as described by historian James Thomas Flexner. More than any other, he helped shape some of the norms of our national government.

Following the winning of independence, Lincoln and Roosevelt faced the two greatest crises in our nation’s history. They came from very different worlds, but they shared the trait of empathy that grew out of place; a trait that put them in touch with the needs of the ordinary people and gave them the extraordinary strength and courage to address whatever life threw at them. Roosevelt, after being stricken with polio, came to understand hardship in a visceral way. Lincoln’s empathy is well documented, as in his response to an issue that contrasts starkly with the Republican response to the recent insurrection:

“Must I shoot a simple-minded soldier boy who deserts, while I must not touch a hair of a wily agitator who induces him to desert? I think in such a case to silence the agitator and save the boy is not only constitutional, but withal, a great mercy.”

We have, unfortunately, seen what happens in a crisis when the person in the Oval Office and his enablers have no real connection to ordinary citizens and lack empathy, not to mention competency and credibility.

President Joe Biden comes from ordinary places — Scranton and Wilmington — and grew up around ordinary people. He did not attend elite colleges. While in the Senate, he rode an Amtrak train home each night from Washington to Delaware to be able to see his children. He suffered horrible personal losses when his first wife and 13-month-old daughter were killed in a tragic car wreck in 1972, and again much later when his son died at the age of 46 of brain cancer. A stutterer when he was young, Biden learned how to deal with bullies and how to be empathetic to others who struggled.

Now as president, Biden faces cascading crises the likes of which we haven’t seen since FDR’s time: a badly managed national response to a worldwide pandemic, the resulting economic fallout, the rise of home-grown white supremacist terrorism, economic and racial inequality, the hollowing out of government for private gain, and an opposing political party that has just demonstrated that a majority of its national leaders are willing to sacrifice our democracy for personal power. Any one of these crises would test the mettle of normal presidents.

We don’t know how Biden will respond, but there are early indications that we have a chance, once again, to see what extraordinary things can come from ordinary places and ordinary people. Joe Biden and Kamala Harris — the daughter of immigrants and the first woman and first person of color to serve as Vice President — cannot do this alone. But as history has shown again and again, we have the chance to count on ordinary citizens in all walks of life — not just our leaders — to step forward to do the extraordinary work necessary to build a more perfect union.

Image by Yinan Chen from Pixabay

* I did a quick count, and I have visited the homes of 16 of the nation’s 46 presidents, and the number goes over 25 when you toss in other sites related to our nation’s chief executives. Not exactly a bucket list item (like my MLB stadiums quest) but a decent number for an American citizen.

The smells of place and time

For beauty, nourishment, and the celebration of life, Mohonk...

Reckonings that are a long time coming

America could learn a lot from its first peoples. Let’s...

Time for a rewrite

What if we have it all wrong? Reality and the dislocation of...

Writing is a communal art