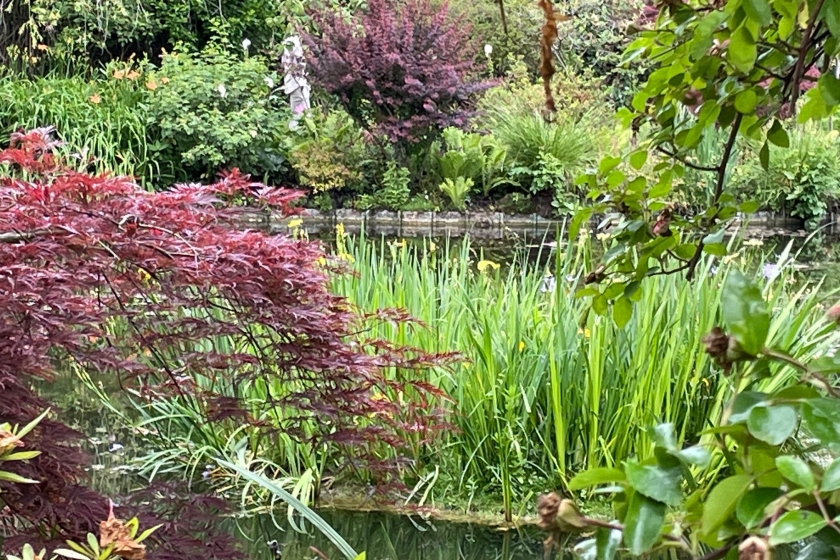 The influence of Japanese art is everywhere at Claude Monet‘s home in Giverny. From the Japanese water lily garden to the artwork in his bedroom to the impressionist masterworks that were featured in the studio, it was clear that Monet called upon the inspiration of Japanese artists as he worked and where he lived.

Perhaps none was more important to Monet than Katsushika Hokusai, a Japanese ukiyo-e artist of the Edo period, active as a painter and printmaker. Born in 1760, his legacy remains, some 150 years after his death, as important as ever.

He is best known for the woodblock print series Thirty-Six Views of Mount Fuji, which includes the iconic print The Great Wave off Kanagawa. Hokusai was instrumental in developing ukiyo-e from a style of portraiture largely focused on courtesans and actors into a much broader style of art that focused on landscapes, plants, and animals.

Although Hokusai lived during the time when the isolationist policy of sakoku in Japan was rigorously enforced on penalty of death, he nonetheless came in contact with western art and influences, which led him to shape his work into a new and unique style that influenced Impressionism and Art Nouveau and a range of contemporary artists working today.

The basics on Hokusai’s life and work are included in the short but gratifying book Hokusai Pop-Ups (2016) by Courtney Watson McCarthy, a paper engineer and graphic designer from New York. It contains, of course, information on the artist but the scene stealers are McCarthy’s dazzling pop-ups of Hokusai’s art. The reader is told of his early apprenticeships where Hokusai learned woodblock printmaking, along with his frequent name changes (up to 30 over his lifetime) that often accompanied job and artistic shifts. Hokusai wanted to live well into his second century in order to master his craft. He did not quite make it, but his impact is nonetheless impressive. A quote from the artist Vincent van Gogh included in Hokusai Pop-Ups captures this spirit and passion.

If you study Japanese art you see a man who is undoubtedly wise, philosophic and intelligent, who spends his time how? In studying the distance between the earth and the moon? No. In studying the policy of Bismarck? No. He studies a single blade of grass. But this blade of grass leads him to draw every plant and then the seasons, the wide aspects of the countryside, then animals, then the human figure. So he passes his life, and life is too short to do the whole.

This delightful movable book is, to put it simply, a feast for the eyes.

Hokusai’s art, notes McCarthy, was “realized in jewel-like colors.” The more modern focus of his work on landscapes, simple views of everyday scenes in Japan, and common folk — coupled with “his sense of balance and harmony, and his highly stylized but ever-changing techniques — seem to capture the spirit and traditions of his homeland.” It is through McCarthy’s intricately engineered pop-ups — one of the more recent in a long and impressive history of movable books that has delighted and informed children and adults alike through the ages — that Hokusai’s art “comes to life” in a new and exciting fashion.

Many of Hokusai’s best-known works, such as Ejiri in Suruga Province, Chrysanthemums and Horsefly, Phoenix, Kirifuri Waterfall at Kurokami Mountain in Shimotsuke, The Poem of Ariwara no Narihira, and the iconic The Great Wave are included, each accompanied by explanatory text and complementary quotes from writers and artists.

The author’s backstory is also interesting.

With a degree in theatrical scenic design, (McCarthy) worked as a model builder and designer in a variety of fields before discovering the magic of movable books. From the time she dissected her first pop-up book, determined to solve the riddle of how it worked, she was hooked. After experimenting with cards and other small projects, she went on to design and engineer Eye Magic, M.C. Escher Pop-Ups, New York Times—acclaimed Gaudí Pop-Ups, Pop-Up Numbers, Dalié Pop-Ups, and Hokusai Pop-Ups.

Monet came to Hokusai’s work in 1867, when he visited the Japanese pavilion at the Exposition Universelle in Paris. There he saw a wealth of ukiyo-e prints, including many by Hokusai, an artist who had died in 1849 and whose works were unknown to him. The chance encounter changed the direction of Monet’s art, “leading him to create a Japanese-inspired garden in the grounds of his home and fill it with waterlilies he obtained from the pioneering nursery of Joseph Bory Latour-Marliac, himself gripped in the love of Japanese art.”

Japanese art and Hokusai not only influenced impressionists like Monet, but many of the pioneering architects and designers of the late 19th and early 20th century also fell under its spell — individuals such as the Scottish architect Charles Rennie Mackintosh and his wife, the artist Margaret Macdonald, as well as the American architect Frank Lloyd Wright.

Now, thanks to the moveable book artistry of Courtney Watson McCarthy, we have also been led to a deeper appreciation of this great Japanese artist.

UPDATE: My friend Jeff Cody sent a note (included in the comments) that I want to point readers to: Regarding Hokusai, Jeff said, I think you’d find this commentary by Jason Farago (NY Times) pretty cool.

For other More to Come posts on Japan, art, gardens, and architecture, click on the links below: