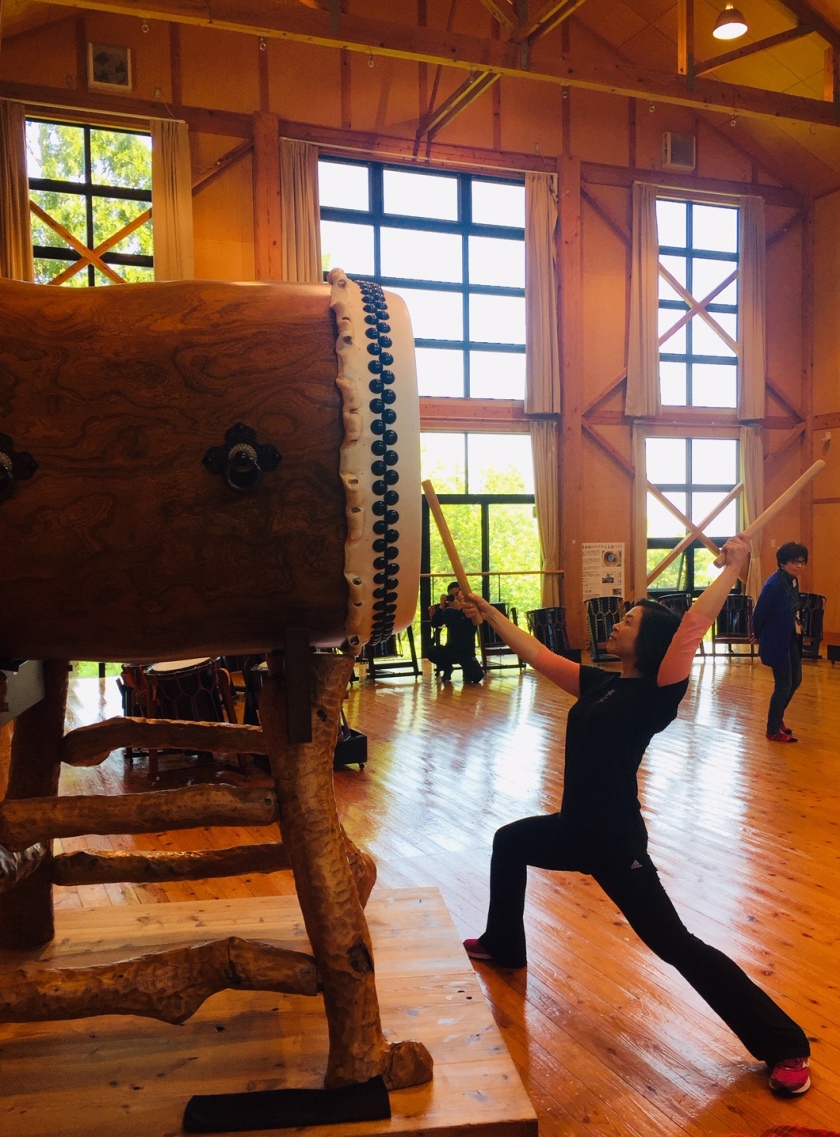 Two wooden sticks, a calf skin, and a hollowed-out tree trunk. Basics from nature. I never thought they could bring such primal fun, but that was before I spent a morning at Kodo’s Sado Island Taiko Center.

The recent National Trust Tours Japan by Sea trip led me on a Friday morning to remote Sado Island, the nation’s 6th largest island comprised of two parallel mountain ranges separated by a plain dotted with small rice farms. First known as a place of exile for intellectuals and political dissidents, it now boasts premium quality rice and sake. It also serves as the home base for the world-famous taiko drumming group, Kodo.

“Exploring the limitless possibilities of the traditional Japanese drum, the taiko, Kodo is forging new directions for a vibrant living art-form. In Japanese the word ‘Kodo’ conveys two meanings: Firstly, ‘heartbeat’, the primal source of all rhythm. Secondly, read in a different way, the word can mean ‘children of the drum’, a reflection of Kodo’s desire to play the drum simply, with the heart of a child.”

When we arrived at the beautiful Taiko Center, the first view of the drumming room took my breath away. One’s eye is drawn to many different features: the large glass windows inviting the lush Sado Island landscape inside, the circle of drums along the walls, the wood construction and cathedral ceiling that promise wonderful acoustic properties for the drumming, and—primarily—the two huge taiko drums that were hand-carved from a 600-year-old “keyaki” (Japanese Zelkova) tree by Kodo members. It is a sight that excites the senses.

We were warmly welcomed and given a history of the center and the Kodo Cultural Foundation, which is focused on social education and giving back to the local community. Kodo grew out of a 1970s concern that young people were leaving the island. Eventually Kodo was formed as a type of university for the study of traditional Japanese arts and crafts. More than 30 performing members, apprentices who undergo a two-year program, probationary junior members, and other supporters make up the community. One of the more exciting recent programs is an expansion of the use of taiko in promoting health, fitness and preventive care for disabilities through their “Exadon” program.

Our instructor for the day was a charming young woman who initially helped us with the appropriate stance behind each drum (legs spread apart, knees bent, stomach tucked in tightly) and the proper grip on the drumsticks (with a loose wrist). On the first few beats, our group was all over the place. But like a patient choirmaster, our instructor asked us to listen to each other and work as one. Soon the sound of the drums, beating in unison, was booming around the room, making the tops of the two huge taikos vibrate with sympathetic sound (similar to the lower strings on a harp guitar). The world was coming together as one. Then, picking up the pace, she laid aside her drumsticks in order to use two wooden blocks as a metronome. She had the group varying tempo, twirling between beats, and generally losing ourselves in the excitement of the sounds.

For a brief time, we became the children of the drum. I cannot remember when I’ve had this much fun.

Our lesson completed, we were treated to a thrilling mini-concert on the largest of the taiko made from the keyaki tree. For the rest of the day, the group babbled in excitement. We’d been together almost two weeks, but it took those children’s toys to connect us at a different level.

We love our technology and what it makes possible today. But we also need to remember the basic things that make us human, helping us work together in community. We need to find ways to get to the heartbeat.