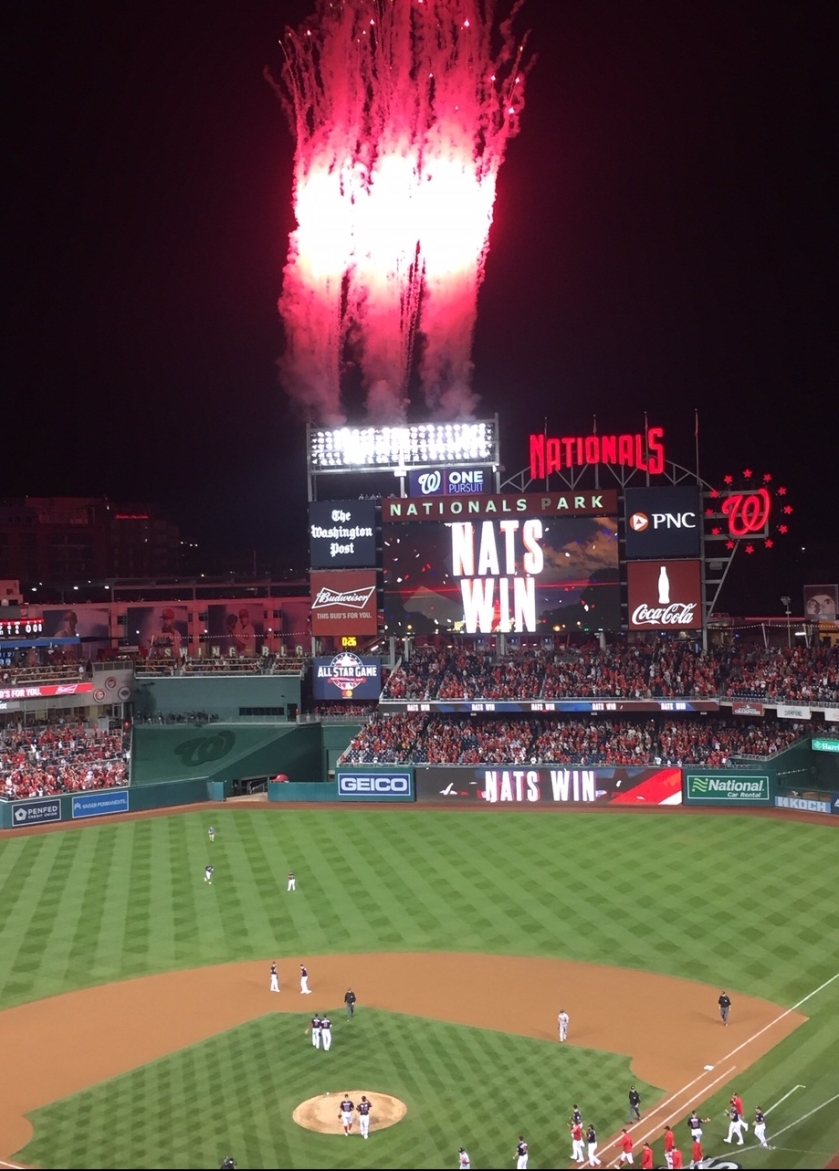 Nats are going to the World Series! (Photo of Game 3 NLCS win by Tom Cassidy)

When much-maligned Washington Nationals manager Dave Martinez was asked how he felt after his ballclub just completed an improbable four-game sweep of the St. Louis Cardinals in the National League Championship Series (NLCS), he went back to something his mother told him: “Often bumpy roads lead to beautiful places.”

Then, in light of earning the franchise’s first trip to the World Series, he added, “And this is a beautiful place.”

NLCS Most Valuable Player Howie Kendrick—one of 18 resident “Los Viejos” (the Old Men) on the Nats playoff roster over the age of 30—said, “I can truly say this is the best time of my career, the best moment of my career this year.”

I can add that in my 55 years of being enthralled by baseball—beginning as a nine-year-old with a 1964 trip to Wrigley Field on a family vacation to see the Cubs play Bob Gibson and the St. Louis Cardinals; to following Willie Mays and the San Francisco Giants from afar, as a kid growing up in Middle Tennessee; to the Atlanta Braves teams of the 1970s, and 1980s, and 1990s; to the Nationals arrival in DC in 2005; to my bucket list quest to visit all 30 MLB ballparks; to the Division-winning teams of 2012, 2014, 2016 and 2017—nothing compares to the joy of watching this year’s Nationals.

What a way to spend a gap year!

I may not have any expectations for this team, but, as I said following this club’s improbable Wild Card game win and again after they crushed the mighty Dodgers in five games of the NLDS with Howie’s 10th inning grand slam, I sure am having fun.

Last evening was no exception.

As a one television family, we had a “discussion” in our household about whether we were going to watch the Democratic Presidential Debate or Game 4 of the NLCS. I volunteered to go on the road, so I headed across the street to our terrific and lively local brewery, the Silver Branch Brewing Company. There I settled in at the bar with a group of other red-clad Nats fans, ordered up an October brew, and watched the game while chatting with new friends and bartenders. The seven-run first inning had us all in a state of euphoria, but I recalled to my bar mate that we had a 6-0 lead in 2012’s elimination game against these same Cardinals. Nothing was assured. When the Cardinals clawed back to 7-4, it was time to order a second beer.

And yet, the Nats hung in there and fought through all the challenges thrown at them.

One of the great lines in the many column inches in today’s Washington Post about the Nationals win came from that long-time baseball scribe Thomas Boswell, who wrote about that May day when, “The team landed a Baby Shark named Gerardo Parra on a one-ounce test line — picked up free, with the San Francisco Giants still paying his salary.”

When Parra came in late in Game 4 and got a hit, somehow I knew that the Nats would win. Parra brought joy back to Washington baseball after too many seasons of pinning our hopes on the talented but moody and aloof Bryce Harper. Heck, Parra even got that old head case Stephen Strasburg to dance and laugh in delight when enveloped in a group hug he couldn’t have escaped even if he wanted to.

As columnist Christopher Powers noted, “Of the four teams left in the MLB Playoffs, there was really only one that could be characterized as ‘likeable,’ that team being the Washington Nationals.” Powers looks at the other teams that were in the two league championship series and finds them all lacking in likeability.

“The New York Yankees? Evil Empire. The St. Louis Cardinals? Most insufferable fanbase ever. The Houston Astros? Cocky players and even cockier fans, which is funny considering they just discovered the franchise existed in 2017.”

Every one of those characterizations is spot on. And speaking of insufferable, who died and left Yadier Molina as the king of baseball’s unwritten rules? He’s a terrific, Hall of Fame-bound catcher, but give me a break with all the grousing about how to play the game. Let the young kids and “Los Viejos” have some fun! Break out the Parra rose-colored glasses!

“As for the Nats,” Powers continues, “now that Bryce Harper is in Philly, there’s really nothing hate-able about them.”

Not only is there nothing hate-able, there’s a lot there to just sit back and enjoy. And now we get to do it for at least four more games in 2019.

So we’ve celebrated, danced, and now we wait for six long days before the start of the World Series, against either the formidable Houston Astros or New York Yankees. A World Series where I’ll have no expectations…except for the expectation to have a great deal of fun.

Installment #13 of The Gap Year Chronicles