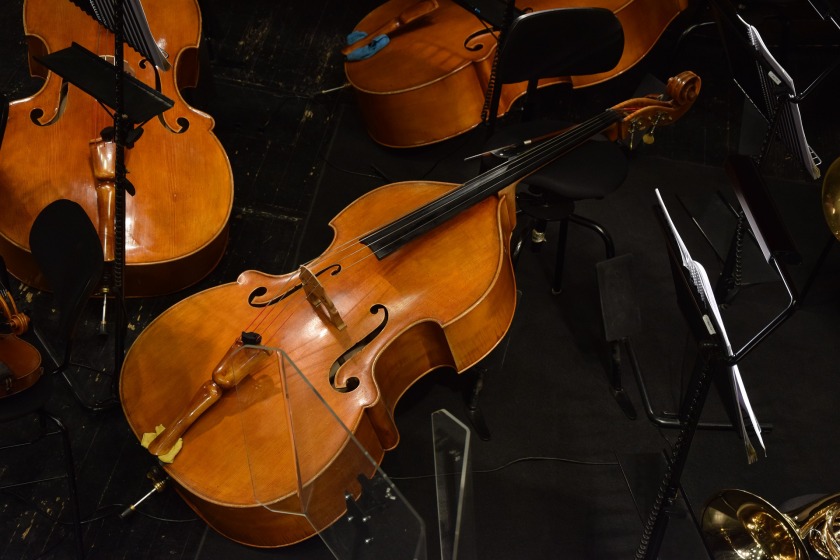 As any thinking person would realize, this is not a Saturday Soundtrack about Meghan Trainor.* In fact, just to be safe I thought about naming this version Catching some bass, which is the title of a wonderful article I discovered early in my blogging career written by Miss Music Nerd. Her piece is about the difference between the instrument or voice with the lowest register in a musical ensemble and a fish with a name that is spelled the same but pronounced differently. But even that sentence is confusing, so I went with my original instincts.

For as long as memory serves, I have been captivated by the beautiful, deep, resonate sounds of the acoustic bass. When first listening to bluegrass, roots, and acoustic music in the late 1960s, I loved hearing those mandolins, fiddles, and guitars grounded in the wooden music that can only come from the acoustic double bass. And as my tastes broadened into a greater appreciation of jazz, the cool cats on the bass again mesmerized me with their clear groves. Mind you, I don’t really play the bass (the picture above notwithstanding), but simply love what a good musician can do with this instrument.

So this will be a two-part Soundtrack. Today we’ll focus on roots music bass players from the bluegrass, folk, new acoustic, and Americana genres. Next week, we’ll explore some jazz cats. Oh, and while a good Paul McCartney bass lick pleases me as well as the next baby boomer, no electric basses need apply for this review.**

Most of the musicians in the roots field point to the importance of Tom Gray, the bassist with two of the more influential bands in bluegrass music: The Country Gentlemen and The Seldom Scene. Tom was influenced by the music of George and John Shuffler, flashy bass players with The Stanley Brothers, as well as the jazz bass of Keeter Betts, who played with guitarist Charlie Byrd. But in the 1960s and 70s, he built a sound that worked to support the strong vocals and instrumental skills of the Gentlemen and the Scene, and in the process became the best-known bluegrass bass player of his generation.

Tom can play flashy instrumentals, and one of his showpiece tunes with the Seldom Scene was Grandfathers Clock, heard here on 1975’s Live at the Cellar Door album.

I got to know Tom when he began helping his daughter Julie at the Silver Spring Farmers Market. If he wasn’t too busy, we would chat a bit and discuss who he was playing with that weekend. You can see Tom from this era, with the late Dr. John Starling and another former member of the Seldom Scene, Ben Eldridge, in this 2014 Smithsonian Folkways video of With Body and Soul (featuring wonderful background vocals by Emmylou Harris).

One of the musicians who can play outstanding bluegrass but, just as importantly, helped showcase the possibilities of the acoustic bass in the new acoustic music of the 1970s is Todd Phillips. An original member of the David Grisman Quintet, playing both mandolin and bass, Phillips went on to play bass for many years with Tony Rice, helping Tony create both his jazz-influenced work as on the tune Mar West and making bluegrass history with the Bluegrass Album Band.

Fat Kid, the opening cut from Phillip’s 1983 album Released, features Tony Rice on guitar, DGQ bandmate Darol Anger on violin, and Phillips on both bass and mandolin. The bass and mandolin interplay to kick off the tune is worth the price of admission.

Phillips has also explored his jazz and bluegrass roots as a part of the Phillips, Grier, and Flinner trio, heard here in 2019 on Tennessee Blues.

Phillips’ turn playing Thibodaux with the Claire Lynch Band gives me the perfect segue to my next bass hero. Phillips was in Claire’s band at that time because her regular bassist, Mark Schatz, was playing the 25th anniversary reunion tour with Nickel Creek.

Mark Schatz is an amazing bassist (and a great banjoist, dancer, and hambone player to boot) who has played with damn near everyone in the roots music field — Claire Lynch, Tony Rice, Bela Fleck, Nickel Creek, Tim O’Brien…the list goes on and on. I have always loved the set at Merlefest where Rice fronts a super group of Sam Bush, Fleck, Mark O’Connor, Jerry Douglas, and Schatz. Here they play Bela’s tune Whitewater. Bring out the fire extinguishers!

In looking around the internet, I came across this really delicious banjo/bass duet, Banjo Meltdown, from 1992 with Schatz and Bela Fleck. At about the 3:20 mark, Bela backs off to give Schatz some room to stretch out.

And in another segue, this bass duet on one bass takes this post from Schatz to Edgar Meyer.

“Throughout a lifetime of performing and composing, Edgar Meyer has turned the double bass into a modern virtuoso instrument that is equally at home in classical music and in the American vernacular. In 1994, Meyer became the first bassist to win the Avery Fisher Prize. He is also a recipient of the prestigious MacArthur Foundation “Genius” Award and three Grammy Awards. Meyer has found devoted audiences through a vast range of projects, from his own double bass concertos that he continues to perform regularly to recital collaborations with Emanuel Ax and Amy Dorfman and performance and recording projects with artists including Joshua Bell, Yo-Yo Ma, Bela Fleck, Zakir Hussain, Mark O’Connor, Sam Bush, Jerry Douglas, Mike Marshall, and many others. The New Yorker calls him ‘the most remarkable virtuoso in the relatively unchronicled history of his instrument.’”

Many of us came to know Meyers’ music through the acoustic supergroup Strength in Numbers with Bush, Fleck, Douglas, and O’Connor. Meyer has a tasty bass solo in Duke and Cookie beginning at the 1:50 mark.

We’ll continue our tour of Meyer’s work with two of his duets with Chris Thile. Those are followed by an incredible Tiny Desk Concert from 2010 with Meyer, Fleck, and Zakir Hussain. This amazing music is well worth the listen.

As a foretaste for next week’s Soundtrack, here’s Meyer with jazz bassist Christian McBride in a wonderful bass duet entitled Solar.

There are many other roots and bluegrass bass players I could feature, including Byron House, Bryn Davies (check out the solo at 5:50), and the wonderful Missy Raines.

I love Missy’s version of the old Flatt & Scruggs tune Darlin’ Pal of Mine with Alison Brown because Todd Phillips and Mike Bub (another terrific bluegrass bassist who has played with everyone from Del McCoury to Sturgill Simpson) show up to join in the fun and add the only triple bass playing on the double bass I’ve ever seen!

That’s enough for now. Just remember, its all about that bass!

*To my ears, the best version of Meghan Trainor’s pop hit All about that bass (no treble) is from the folks at Postmodern Jukebox, where vocalists Haley Reinhart, Morgan James, and Ariana Savalas rock some great Andrews Sisters- style harmonies. Most importantly for these purposes, it also features a “sweet four hand bass solo by Casey Abrams and Adam Kubota.”

Image by Andrzej Nowak from Pixabay

**But careful readers will know that by clicking on the two links in the Paul McCartney sentence, you’ll get Come Together and Day Tripper…two wonderful bass lines from the many in the Beatles catalog.