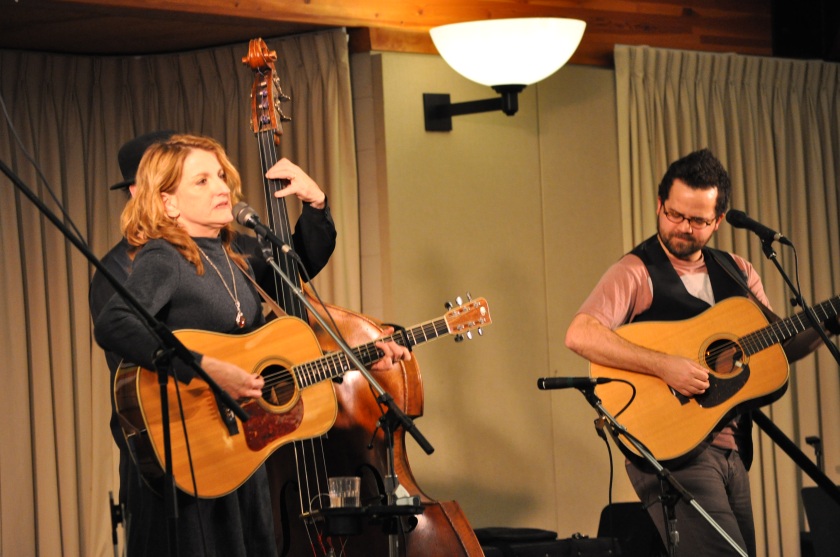 At one point in Monday night’s thoroughly satisfying concert by The Claire Lynch Band at the Institute of Musical Traditions, the band leader mentioned that she started in the music business 33 years ago.  It doesn’t seem that long ago when I heard her play at the Shenandoah Valley’s Oak Grove Music Festival, but in fact it may have been two decades since I saw her with the Front Porch String Band.

Thirty-three years is a long time to be on the road, but Lynch and her band of hot young phenoms supported by veteran bass man Mark Schatz, had the energy and sound to more than satisfy the sold-out IMT crowd.

Lynch has been an impressive band leader, prolific songwriter (truth-in-advertising: some co-penned in the past with my musical cousin, Hershey Reeves), and all-around pioneer in the acoustic music world…but she’s still most impressive as a singer. She showed us all time and again on Monday evening why she won the 2010 IBMA Female Singer of the Year award.

Standouts from a wealth of good tunes in the two-hour set included Hummingbird, which Lynch sang with banjoist Alison Brown on the Fair Weather CD; a haunting Dear Sister, about a Civil War soldier writing his sister on the eve of the battle of Stones River; and the old-time inspired Widow’s Weeds, with Schatz on clawhammer banjo.  Schatz, as usual, also livened up the evening with his hambone dancing and solid play on the bass.  Guitarist Matt Wingate showcased impressive chops throughout, as he’s taken big strides in his music since I last saw him with the Lovell Sisters (and he was pretty doggone good at that point). And the newest member – fiddler Bryan McDowell – didn’t miss a beat on his second night out with the band.

After closing with a spirited Wabash Cannonball, where everyone stretches out musically, Lynch and the band came back on stage for an encore – and played my cousin’s Hershey’s composition Your Presence is My Favorite Gift.  This simple and beautiful gospel number was a perfect ending to an evening with a wonderful songbird.  Enjoy the video below of Claire singing Your Presence at a 2008 concert (with the song beginning about 55 seconds in).  Thanks to the good folks at IMT for making it all possible.