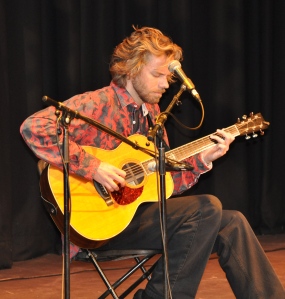 James Nash once gave some good advice to aspiring guitarists:

Rule #1 for learning to play fast:  don’t practice while watching the ball game.

Well, tonight…I’m guilty.  Two hours after starting, I’ve finally put the last instrument back on its stand.  I was watching baseball the entire time.

However, I suspect that the San Francisco-based Nash would approve of my choice of ballgame, as the hometown Giants are in the World Series against the Detroit Tigers. And while I didn’t get any real practice in tonight, it sure was fun to multitask around two things that I love.  (Note to regular readers:  Candice, who has become a baseball fan this year with the emergence of the Nats, is out-of-town. I wasn’t ignoring her.)

I grew up as a Giants fan.  The Braves hadn’t moved to Atlanta, so we didn’t have a MLB team in the South.  And Willie Mays is, to my mind, the most complete player in the history of the game.  He was so much fun to watch as a young kid in Tennessee. In those pre-internet days, I had to resort to calling the sports department of the local paper, the Daily News Journal, to get the west coast Giant scores off the wire. But it was worth it to find out if Mays and the Giants won.

Since my Nats couldn’t make it past the Cardinals this year in the postseason, I’m solidly behind the Giants in this World Series.

And, at the risk of jinxing them, they’ve had a great start in Game 1.  How about the Panda!

Multitasking isn’t helpful to living in the moment, but tonight I’ve lived in two great moments simultaneously! I’ve just loved wrapping my hands around my Running Dog.  And I have so enjoyed seeing the Giants get off to a great start in the World Series.

Being the superstitious baseball fan I am, if the Giants win I’ll have to multitask again tomorrow night!

P.S. – If you want to hear Nash give his advice first hand, go to the 4:30 mark in this video and you’ll hear it from the mouth of the master.

The intimate and melodic mandolin stylings of John&nbsp...

History has its eyes on us

The past and future of historic houses of worship

The moral potential of surprise

The continuing fight for the soul of America

I love the pithy proverb – Volume 5

It is never too late to change the future

“Tell me, what is it you plan to do with your one wild and precious life?”