If it is the Christmas season, it means that the Browns are likely to have a new family photo taken by our friend John Thorne.

(Blog interruption:  For those who may be wondering about the use of Christmas language after New Year’s Day, just think of the 12 Days of Christmas.  That’s how we celebrate at the Brown home.)

I’ve written before about the fact that we wouldn’t have family photos if not for John.  Thankfully, he showed up at church on December 20th and asked if we would like a family picture.  All four of us were there, and it was also Andrew and Claire’s 23rd birthday.  A perfect day to capture the family for 2015!

John used two settings, with two different cameras.  At the top you see us in the church yard, while the photo below shows the Washington National Cathedral in the background. 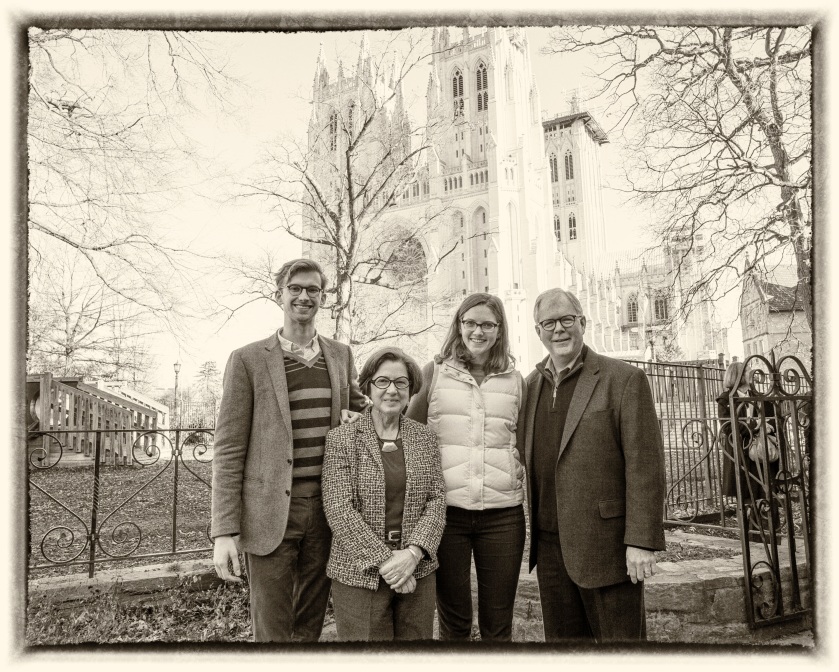 What a wonderful gift for the Christmas season.  Thank you John!

Speaking of getting the family together:  I’ve been hinting over the past couple of months that I’d like to round out my “family” of Racing Presidents’ bobbleheads…and my wonderful wife heard me.  Bill Taft was under the tree this year, and today he took his position on my desk with the “Mount Rushmore 4” and Calvin Coolidge.

I’ll have to admit that collecting racing president bobbleheads is a great deal less expensive than G.A.S. (aka Guitar Acquisition Syndrome).

Now, if you don’t know what the racing presidents do, here’s a little sample…from the last race of 2015.

And remember…only 44 days until pitchers and catchers report!  (Thank you Spring Training Countdown!)

Here’s hoping you found what you wanted under your tree this holiday season!