As 2018 draws to a close, I’m sharing this list of the books I read over the past twelve months.  Since returning from sabbatical early in 2016, I committed to reading more, and to seek out a wider range of works beyond my normal histories and biographies. Here are the treasures I found on my reading shelf this past year.

“Lincoln in the Bardo” by George Saunders

Lincoln in the Bardo by George Saunders. I began the year with a work of fiction. In this at times perplexing yet ultimately satisfying novel, Saunders builds off the fact that in February 1862, just a year into the Civil War, President Abraham Lincoln’s 11-year-old son Willie dies of typhoid fever. It is known from contemporary accounts that the President went several evenings to stay in the crypt with his son’s body in Georgetown’s Oak Hill Cemetery. Saunders takes that bit of knowledge and turns it into a rich story populated with dozens of spirits who reside in the Bardo, which is the Tibetan Buddhist name for a transition period between death and rebirth.

Tears We Cannot Stop by Michael Eric Dyson.  A powerful call for recognition and redemption which brims with this Baptist preacher’s righteous anger.

Practicing:  A Musician’s Return to Music by Glenn Kurtz.  Early in the year I returned to reread this wonderful memoir of a young child prodigy on the classical guitar who attends the prestigious New England Conservatory of Music and then quits playing in his early 20s when he realizes he won’t be the next Segovia. Fifteen years and a career change later, Kurtz returns to the guitar and finds a richer love for music.

Grant by Ron Chernow.  One of the few historians who, through deep scholarship and powerful writing, can drive the country toward a full reappraisal of a historical figure’s life and impact, Chernow has  worked his magic in the past with Alexander Hamilton and George Washington. He does so again with this impressive biography of U.S. Grant. 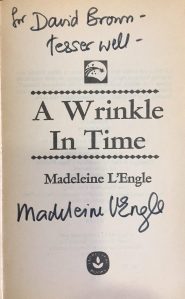 A prized copy of “A Wrinkle in Time”

A Wrinkle in Time by Madeleine L’Engle.  The release of a new movie of this timeless classic led me to pick up my cherished, signed-by-the-author copy, and reread once again the story that has captivated children and adults alike since its release.

Wanderlust:  A History of Walking by Rebecca Solnit.  I reread this book in the late winter after a friend mentioned that she wanted to read something by Solnit, the wonderful historian and essayist.  As often happens, I discovered so much more upon a second reading.

Bad Stories:  What the Hell Just Happened to Our Country by Steve Almond.  The author makes the strong case—using examples from Moby Dick and other classics of literature—that we’ve made bad decisions as a country because we’ve told ourselves bad stories for a long time…and “bad stories arise from an unwillingness to take reality seriously.”

Evicted:  Poverty and Profit in the American City by Matthew Desmond.  An important new work about poverty in 21st century America and the role of corporate America (both major financial institutions and small mom-and-pop rental firms) in driving housing policies that put profit first and people last.

Evolving Ourselves:  Redesigning the Future of Humanity—One Gene at a Time by Juan Enriquez and Steve Gullans.  This wide-ranging look at how humans are changing the course of evolution for all species challenges one’s thinking on multiple levels. 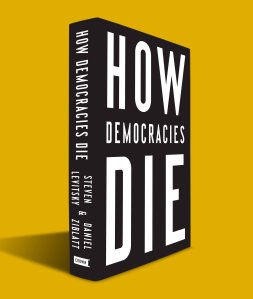 How Democracies Die by Steven Levitsky and Daniel Ziblatt.  The research over twenty years by these two Harvard professors shows that more often than not, it is the slow decline of institutions such as the judiciary and press that lead countries to move from democratic to authoritarian governments. This accessible book is highly recommended, and should be required reading for the entire country at this point in time.  Given what we are facing as a country, this is my choice for book of the year.

Hero of the Empire:  The Boer War, A Daring Escape, and the Making of Winston Churchill and The River of Doubt:  Theodore Roosevelt’s Darkest Journey by Candice Millard. I read and enjoyed both of these short, fast-paced books by this best-selling author and story-teller extraordinaire.

Longitude: The True Story of a Lone Genius Who Solved the Greatest Scientific Problem of His Time by Dava Sobal.  John Harrison’s story, as told by Sobel, is part of a series of books I’ve read over the past year or two about the scientific advances that helped shape the modern world. Once Harrison’s marine chronometer helped sailors determine exactly where they were at sea, everything changed.

The Grapes of Wrath and Cannery Row by John Steinbeck.  Two classics that I read (or reread in the case of TGOW) while taking a summer vacation in Pacific Grove and Monterey, California.

Grit:  The Power of Perseverance and Passion by Angela Duckworth.  Imagine hearing the phrase “You know, you’re no genius” your entire life and then, years later, being awarded a MacArthur Fellowship—often called the “genius grant”—in recognition for work that was cutting-edge and transformational in the field of psychology. That happened to Angela Duckworth, and this book summarizes her years of study.

In the Shadow of Statues:  A White Southerner Confronts History by Mitch Landrieu.  This memoir by the former mayor of New Orleans hit home for me on both a personal and professional level.  As Mayor Landrieu notes early in this book on his personal journey to confront the true story behind Confederate monuments, “The statues were not honoring history or heroes.  They were created as political weapons, part of an effort to hide the truth, which is that the Confederacy was on the wrong side of humanity.”

What Truth Sounds Like:  RFK, James Baldwin, and Our Unfinished Conversation About Race in America by Michael Eric Dyson.  This powerful book takes us back to a meeting between Robert Kennedy, James Baldwin, and others in the 1960s, and brings the conversation forward to our bitter racial struggles of the 21st century.

Stand Out of Our Light:  Freedom and Resistance in the Attention Economy by James Williams.  A short but enlightening read about how technology is designed to capture our attention, and what you can do about it—by a former Google strategist turned Oxford philosopher.

Read every chance you get

The Faraway Nearby by Rebecca Solnit.  I ended the year by returning to one of my favorite authors.  The first of the two works of Solnit’s I read in December “explores the ways we make our lives out of stories, and how we are connected by empathy, by narrative, by imagination.”

Call Them by Their True Names:  American Crises (and Essays) by Rebecca Solnit. Yet another powerful collection of essays from one of America’s most insightful writers. In Call Them by Their True Names, “Solnit turns her attention to the war at home. This is a war, she says, ‘with so many casualties that we should call it by its true name, this war with so many dead by police, by violent ex-husbands and partners and lovers, by people pursuing power and profit at the point of a gun or just shooting first and figuring out who they hit later.’”

I hope you’ll find one or two things to pique your interest among these wonderful books.  My 2019 list will begin with Craig Nelson’s 2006 biography of Thomas Paine, who I rank along with Roger Williams as one of the two most intriguing, yet often forgotten and totally misunderstood, founding fathers.