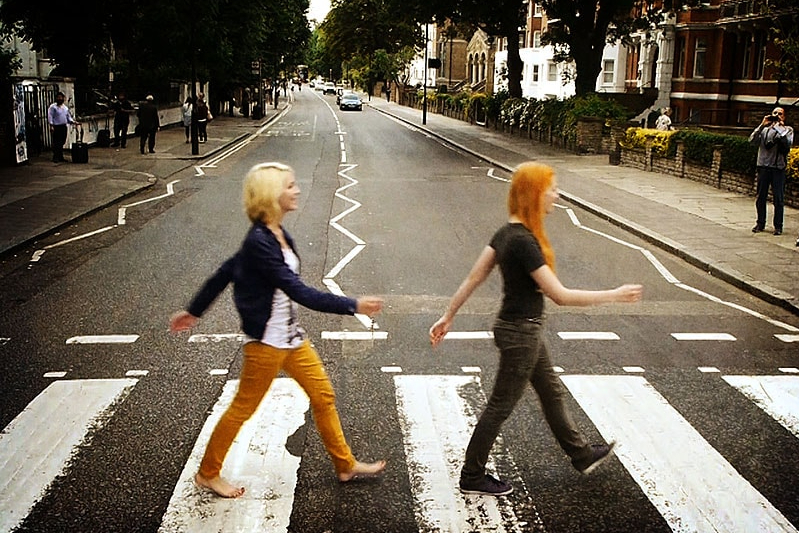 With the arrival of cold weather, we all have thoughts of snuggling under a warm quilt, perhaps sharing the covers with someone we love.

In a recent post, I highlighted a different type of cover. Sharing the Covers is a collection of songs written and originally performed by the musicians who influenced the bluegrass band Chatham County Line. Songs such as Watching the Wheels by John Lennon or The Last Time by the Rolling Stones.

Covers of songs written and made famous by others are a dime a dozen, and most are not very good. But I do enjoy hearing some of the excellent musicians from the roots and Americana fields interpret their favorite bands and songwriters. This Saturday Soundtrack is my compilation of unexpected covers from unanticipated sources.

The always adventuresome Nickel Creek is up first. Many years ago, when my daughter Claire and I were at Merlefest, Chris Thile stepped to the microphone and said, “I know it is the third day and we’ve heard a lot of great music, but I’m afraid no one has played any Brittney Spears.”

Claire’s head jerked around as Nickel Creek began the most outrageous cover of Toxic. The playful video below of the band doing the same tune is from their 2014 reunion tour at the Pick-a-Thon festival. You have to watch it for no other reason than to see if Sara Watkins is going to poke Chris’ eye out with her bow while he’s prancing around. Priceless!

This band will cover anyone, and that includes the Canadian indie rock band Mother, Mother with the frenetic Hayloft, also from their 2014 reunion tour. It was as wild live in Charlottesville as it is on this video from their Nashville concert.

The late Nanci Griffith, appearing on a 1991 Austin City Limits songwriter showcase with the Indigo Girls, Mary Chapin Carpenter and Julie Gold, tears into an energetic cover of No Expectations from the Rolling Stones‘ 1968 album Beggars Banquet. Everyone loves covering the Stones!

The Gibson Brothers also get in on the act of covering classic Stones material, this time with It’s All Over Now from 1964. On their most recent album, the brothers perform a cover of R.E.M.’s Everybody Hurts.

Billy Strings, that wizard of the guitar, played a Halloween night concert this year in Asheville, NC. What’s a wizard to do on Halloween but come out with his band dressed as Dorothy and her three friends from Oz? (Strings is dressed as the Scarecrow. The banjo player is a ridiculous-looking Dorothy.)

The entire concert can be purchased from the You Tube channel, and the preview clip includes a good bit of Strings and his band opening that show with a bluegrass cover of the Rolling Stones‘ You Can’t Always Get What You Want. Given the strangeness of the evening, it also made sense to travel the strange road of The Grateful Dead, with a cover of Samson and Delilah.

The MonaLisa Twins, with real-life twins Mona and Lisa Wagner fronting the band, are from Austria and seem to be strange ambassadors for the music of the Swinging Sixties. They were 16 when they released their first album (well after the 60s were in the rear-view mirror), yet the connections to groups like The Beatles is clear. In fact, as you look on their online shop, they have released a number of albums of Beatles covers. They are not really roots or Americana artists, but they often perform these covers using instruments one finds in those genres.

Take, for instance, I’m Looking Through You from Rubber Soul, which they posted earlier this month. It may be the only version of this song where the banjo (actually a banjo-guitar) takes George Harrison’s iconic lick (played along with an organ on the original) and makes it work. From an earlier time, the Twins play another of my Beatles’ favorites, Drive My Car, also from Rubber Soul.

Be careful, these young ladies can drive you down the You Tube rabbit hole if you aren’t careful (says the voice of experience).

Other singers from the Americana and roots fold have found much to like in the Beatles songbook. Emmylou Harris had a delicious version of Here, There and Everywhere on her Elite Hotel album.

In 2008, the talented singer, songwriter, and guitarist Darrell Scott released a full album covering those who had served as his musical influences. On Modern Hymns, you’ll find covers — as only Scott can do them — of songs by Paul Simon, Kris Kristofferson, Leonard Cohen, and others. I am fond of his interpretation of Gordon Lightfoot’s All the Lovely Ladies, and I also recommend his take on Adam Mitchell’s Out Among the Stars.

Bob Dylan’s songs have to be among the most covered works in the songbook. But not everyone does them justice. Besides being a terrific songwriter, Sarah Jarosz is a wonderful song interpreter. Here she delivers a masterful performance of Dylan’s Ring Them Bells.

Frank Solivan and Dirty Kitchen — who describe themselves as “the gateway drug to bluegrass” — are well known for their rock covers, several of which I highlighted on an earlier Soundtrack. Here’s the band doing the old Roy Orbison hit Pretty Woman, with banjo player Mike Munford going out of his mind. For music out of left field, you may also be interested in their version of the old Box Tops tune The Letter.

And to end with something completely different. Earlier this month I happened to turn on the CMA Awards just as Chris Stapleton and Jennifer Hudson began their duet tribute to Aretha Franklin of the Willie Nelson song (famously covered by Aretha) Night Life. Oh. My. Goodness. They throw in a cover of You Are My Sunshine for good measure (which, of course, was also covered by Franklin on the 1997 Aretha Arrives album). Stapleton continues to bring so many great artists and genres into country music, which is desperately in need of help today.

P.S. — For those who may have been confused and clicked here with the expectation of sharing quilt patterns, I’ve included a photo of my prized cathedral window quilt, made by Grandmother Brown and shown on one of the family beds in our house.